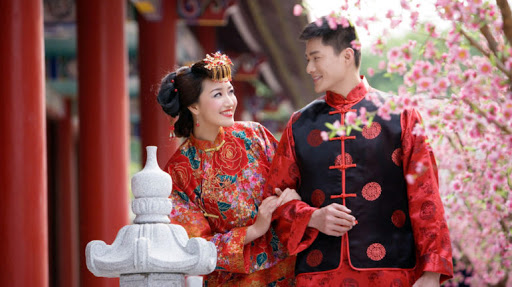 19 Weird Wedding Traditions from Around the World

Though it’s not very weird, we love this unusual tradition. Before the wedding, an Indian bride and her girlfriends have a mehndi ritual when their skin is painted with henna in an intricate way. That looks incredibly beautiful. While there aren’t very weird wedding traditions in the US, there are many of them in Africa. For instance, in Congo, neither bride nor groom is allowed to smile during their entire wedding in order to prove that they are serious about the marriage.

Though it seems to be one of very strange wedding customs, the things are pretty simple. There is a special type of cake at Norwegian weddings called kransekake. It’s made of iced almond cake rings located in the form of a cone while a bottle of wine is placed in its hollow center. It seems to be not only one of Chinese weird wedding traditions but also a harsh one. A future husband needs to shoot his bride with headless arrows several times. After that, he collects the arrows and breaks them during the wedding ceremony. That ritual means that their love will last forever.

A Tooth Gift in Fiji

Fiji people can also boast of strange marriage customs. Thus, when a man asks a woman’s father for her hand, he needs to gift a whale tooth to his future father-in-law. Groomsman as a Barber in Greece

In Greece, a groomsman needs to shave the groom’s face with a razor on the wedding day. After that, a groom gets honey and almonds from his future mother-in-law.

The parents of newlyweds in Guatemala are allowed smashing things at the wedding. One of the traditions includes breaking a white ceramic bell containing grains when a bride and a groom arrive. This ritual is believed to bring prosperity.

Soon after the nuptials, the newlyweds in Germany are gifted a log and a saw. They need to saw the log together in order to prove that they can overcome all the obstacles and be a team.

The Magic Force of a Baby in the Czech Republic

In order to enhance fertility, a baby is placed in the couple’s bed before the wedding. For the same purpose, wedding guests throw rice, peas and lentils on the newlyweds.

In Russia and Ukraine, the newlyweds need to bite a sweetbread adorned with wheat called karavay. Whoever bites the biggest piece without using hands will be the head of the family. Another example of weird Chinese wedding traditions is door games. Bridesmaids organize a quest for the groom in the morning of his wedding day to prove that he is a decent man to marry the bride. Afterwards, the groom gives the girls envelopes with money.

Sometimes, unusual wedding customs have something in common with rather famed rituals. For instance, instead of catching a bridal bouquet, single ladies at Peruvian weddings need to grab a ribbon from a special cake containing a fake wedding ring. The girl who finds the ring is believed to become a bride soon. This is one of unusual marriage rituals that seem to be very scary. But actually, wedding guests playfully abduct a bride and demand a ransom from the groom. As a rule, they ask for a bottle of alcohol or ask the groom to make some actions, like to sing a song. By the way, this custom also exists in Russia and some other countries.

When a man dances with a bride at the wedding, he needs to pin money to her dress to help the couple to cover their wedding costs. So, the more men dance with the bride, the more money the newlyweds get. It’s definitely one of the most ruthless and weird marriage rituals in the world. Before setting the wedding date, Mongolian couples need to kill a baby chicken and extract its liver together. If the liver is healthy, they can set the date. Moreover, the newlyweds need to keep it until they are successful.

The day before their wedding, a bride and a groom are assaulted by their friends and get covered with trash: everything from rotten eggs to flour and feathers. Afterwards, they need to walk around the town. The Scottish people believe that this custom helps to ward off evil spirits. The groom’s friends are allowed to cut his tie in small pieces and sell them to the guests. Sometimes, the same is done to the bridal garter. In such a way, they earn the first money for the new family.

Marriage to a Tree

For Western people, that’s one of the most weird marriage rituals which are still followed while it’s absolutely normal for Indian people. The thing is if a bride was born during particular astrological periods that are believed to be cursed, this curse may cause an early death of her husband. In order to get rid of the curse, a girl needs to marry a tree and then the tree is cut down.

It’s another example of harsh and weird wedding traditions. South Korean grooms are subjected to a feet beating ritual before the marriage. His relatives or friends bind his ankles with a rope, take a stick or a dried fish and start beating him. Throughout the process, the groom is questioned and quizzed. In such a way, his character and strength are tested.