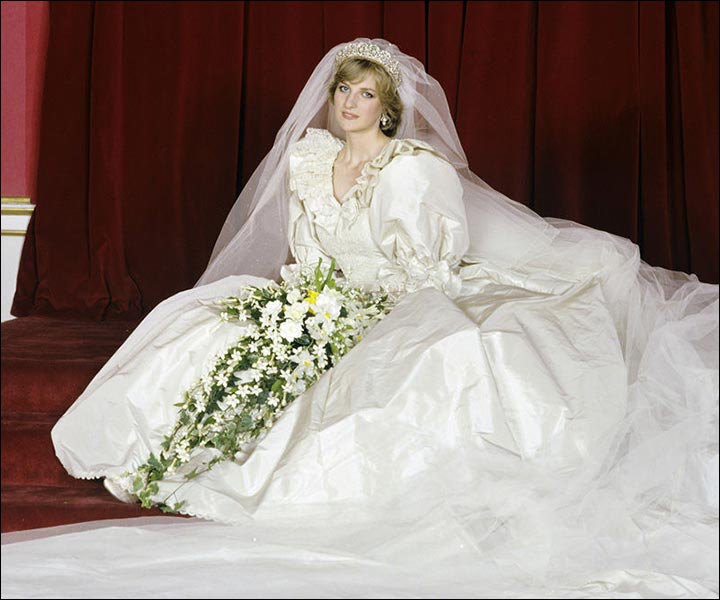 How Wedding Dresses Have Changed: Evolution of the Wedding Gown Through the Ages

But, let’s dig a little deeper and see how wedding dresses have changed. In ancient times, the majority of weddings were more economic unions than unions of two people in love. But, brides preferred to wear bright dresses in order to show their happiness of getting married.

In the Ancient Rome, the brides wore one-piece floor-length tunics, which were knotted around the waist with a girdle. The girdle was tied by the bride’s mother using “knot of Hercules”, which only a husband had a right to untie. A bright yellow veil was worn over the tunic. As a rule, the tunic was of a white color. So, it seems that the white gowns tradition has its roots already in the ancient times.

The History of Wedding Gowns in Medieval Times In Medieval times, marriages were a union of two families, businesses and even countries. That’s why, the marriages of convenience were still the most widespread. As a rule, a bride put on a dress, which her family considered to be the most appropriate to show their wealth and status.

The research of wedding gown history of those times shows that the medieval brides had wedding dresses of rich colors and expensive fabrics. Their wedding outfits often featured silk, velvet and fur. The brides, who couldn't afford such dresses, sewed the gowns of simpler and cheaper materials though tried to repeat the elegant styles. As to the colors, if to have a look at the medieval paintings, it seems that red was one of the most popular colors among brides maybe because it symbolized fertility.

An interesting fact is that the first white wedding gown appeared already in the Middle Ages. In 1406, princess Philippa of England wore a white gown for her wedding.

The History of Wedding Dresses in 16-19th Centuries The history wedding dresses continued to be different. The brides usually wore in the manner, their social status allowed. The girls from wealthy families had the gowns from the richest and boldest materials. But the average bride didn’t usually buy a new dress for a wedding, but just put on the best gown she had.

Moreover, the social status of the bride was demonstrated by the amount of material used for the dress. The wealthier the bride was the longer the train and the more flowed sleeves her dress had.

In 1500, blue was the most popular color for the wedding dress. By 1600, red became the trendiest color among brides. In 1700, the gowns in purple, pink and pastel colors were the most fashionable. Clearly, the royal wedding dresses through history impressed by their luxury and beauty. But there is the gown, which changed everything. In 1840, Queen Victoria wore a white dress for her wedding and set a new wedding tradition. Since then, the women were recommended to wear a white gown for their weddings as well as a veil.

At that time, white was the color of wealth and not purity. The blue color symbolized it and that’s why, many brides married in blue gowns. The choice of Victoria was a surprise, which later turned into a trend.

Of course, not all brides suddenly started to wear white for their weddings as the majority of them put on a gown, which they could afford and wear after the wedding. Even if they gave preference to white, it was usually a simple dress or a two piece suit, which could be used in everyday life. A white dress was also a symbol of a well-off bride as only the richest families could afford buying it as white was a hard color to obtain and preserve.

History of Wedding Dresses in 20th and 21st Centuries During the Great Depression, the history of white wedding dress seemed to be over. Because of the bad economic situation, the majority of brides couldn’t afford buying a gown they would never wear again. That’s why, they returned to the tradition of wearing the best dress of whatever color it was.

During the war, the majority of people couldn’t afford buying a wedding dress. Some brides hired wedding gowns while the other sewed the dresses by themselves out from the curtain fabric. After the war, the mid-calf ballerina-length gowns were in trend, especially among the working women. The situation changed in the second half of the 20th century after the economic boom. A white wedding gown became more popular than before and turned into a real wedding tradition. The wedding gowns of Grace Kelly and Princess Diana were the proof of that. Simultaneously, the creative wedding dress history started. In 1960-70s, the first mini wedding dresses and the wedding suits appeared.

In 1990s, minimalism ruled the world and had its influence on the history of the wedding dress. Many brides wanted to go to the aisle in simple minimalistic gowns, not like the voluminous gowns, which were popular in 1980s.

Nowadays, white gowns remain traditional. However, many brides seek for more creative variants. They walk to the aisle in wedding gowns of various colors and different styles. The color range is from stark white to entirely black. While white and its numerous shades are the most popular, the brides also wear light-colored gowns like blush, light blue, pink and light violet ones.

If to answer the question of how wedding dresses have changed, to say a lot is to say nothing. The wedding gowns looked so different in various times in both colors and styles. Moreover, the development doesn’t stop as new wedding gown trends appear every year. Maybe, some time will pass and we will stop to consider white gowns to be the classic outfit for a wedding.